A Sunny Morning at Mom's

I dreamed about my mother still young and beautiful and alive, and almost immediately, in the dream and in real life, I started crying uncontrollably, and then I woke up. The phrase "tears on my pillow" never had any lasting literal truth for me before this year.

I don't miss her every minute of every day, but the moments when I feel the loss come like gunshots, sudden and messy and undeniable in their impact.

Anyway, it was the endpoint of a long dream sequence that involved me being in Mick's townhouse (!) to help welcome Bobby back from the airport. This welcome back turned into a big house party which turned into a morning after, with Mick and everyone too asleep or hungover to help me home. And so I had to fight my way through streets and streets of soldiers and bus-riding mutants, Mad Max-style, just to get back to my place, which was in UP Village. (I remember Shinji Manlangit, of all people, handing me a laser rifle to help me make it through.) There was an army of people singing parody songs. There was a cult who had devoted themselves to making a warped version of Esquire Philippines, issue by issue. Yes, really.

And at the end of all this nutty chaos, Mick picked me up at home, and we went on a weekend morning to where my Mom was living, in a beautiful house with a swimming pool and a sala suffused with sunlight. Mom was sitting up on a daybed, and I had been bantering with Mick, and I turned to Mom to good-naturedly request that she berate Mick for making fun of me, and then I saw Mom so young and beautiful and alive and I immediately started crying, in the dream and in real life, and I woke up and here I am. 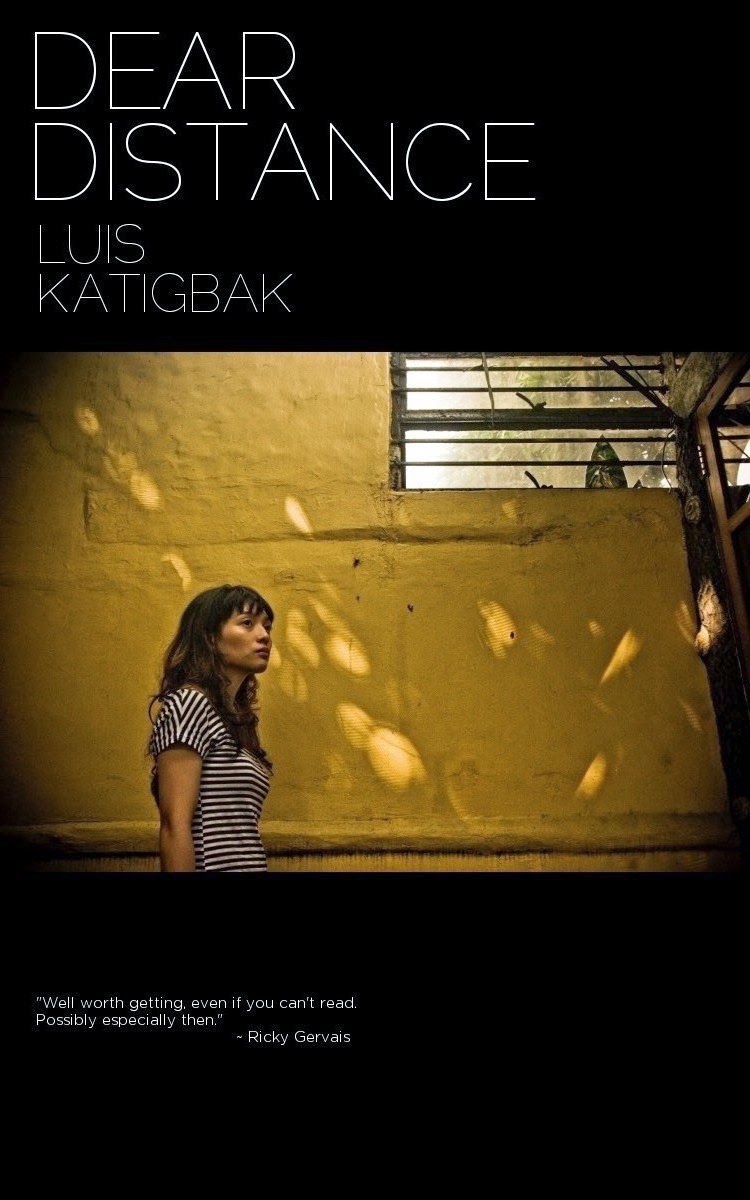 We don't need any new books, do we?

I used to go to Booksale about, oh, twice or thrice a week. Ever since the most recent deterioration of my eyesight -- thanks to the side-effect-laden BP meds prescribed by the sour-endocrinologist-I've-since-stopped-seeing -- I've had to give that up. I can still see the "low-hanging fruit" -- the big coffee table titles in the display window, the books stacked in front or on top of the bins -- but I can't really dig the way I used to, can barely see the spines, much less catch an attractively type-designed title from a distance.

I guess that's okay. I have too many unread books as it is. Of course I miss it though. It was a fairly reliable source of joy, and you need at least two or three of those in life to keep going, I think.

Writing is still -- or can be -- a joy. I suppose my books might be the most enduring things I will produce in this life. The thought of making more still pleases me, on the whole.

And then I think of the people for whom new books are just an excuse to hate or tear down or make themselves feel better by comparison, and I wonder, "Why bother?"

We don't need any new books, do we? Especially if they just end up being targets or paperweights.

But I can't help but still be excited about the idea of new or newly-discovered books. I now enjoy browsing through Amazon (not a great substitute for Booksale, but still). I look forward to the new Jonathan Carroll or Murakami, even if I haven't finished a Murakami since After Dark.

I still want to write things that at least people I love and respect will appreciate (and that might reach a susceptible stranger or two). There may be no point to it, ultimately, but for now, it's still something I want and try to do. And with the two new stories I finished this year, I think I finally have enough for a third book. So that's something. Or at least it's not nothing.

(Above: Possible cover study for my next book. Photo by Kidlat de Guia. Sadly, the blurb is bogus.)
Posted by Luis K. at 7:34 AM 1 comment:

You Should See a Doctor

You should see a doctor.

You should see a doctor who, first, does no harm, and then, second, actually helps people. That's what they're supposed to do.
Posted by Luis K. at 1:14 AM No comments:

This House is Not Your Home

I think my deep-brain might really be trying to tell me something. Just woke up from another dream of leaving: once again, I was in my old room in UP Campus, with the pale yellow walls and the window view; once again, I was packing my things in preparation for living somewhere else. That's at least the third time this week, and it's entirely possible I've had the dream every single night, since I usually forget sleep-dreams. (Although last night's dream was about my cat having a kitten. But maybe it was a chaser-dream or a double feature.)

Things I recall coming across in the dream: my Lola Cil's hardcover, first-print edition of Kerima Polotan's The Hand of the Enemy, which is the copy I read way back when I was in grade school; a drawer full of knickknacks that I wanted to save; and a huge transparent sack of junk food, that contained among other things at least twenty little bags of caramel popcorn and one large plastic bottle of "all natural" yet obviously artificially mass-produced orange juice.

It was this last item that got me to thinking -- I suppose hoping, really -- that this recurring dream might not be a premonition of my impending death. In the dream, there was no question that I intended to discard the sack of junk. Perhaps "moving house" is a metaphor for finally transforming my ailment-ridden body into one that's in better shape. After all, I saw my new doctor earlier for the second time in as many weeks and I think she's helping me. The mood of these dreams, though, is so bittersweet-bordering-on-outright-sadness. Which would make sense if they were death dreams. But why regret leaving a crappy house/ body for a better one? But then again I guess we can learn to love -- or at least be dependent on -- anything that's familiar, no matter how shitty it is. The shittiness you know is safer than the great unknown.

Here's hoping the dreams mean something good, anyway.
Posted by Luis K. at 1:02 AM No comments:

And Change My Stride

Tricky - Makes me wanna die from A on Vimeo.

I've been meaning to write a list of the things I still want to do before I die (write more books, mainly). But tonight I'm just so tired -- tired of trying, tired of pain, tired of people -- and the idea of going away now is just so appealing. I wouldn't mind nothingness afterwards. I will probably feel differently in the morning. Maybe I'll do that list tomorrow.
Posted by Luis K. at 1:37 AM No comments: 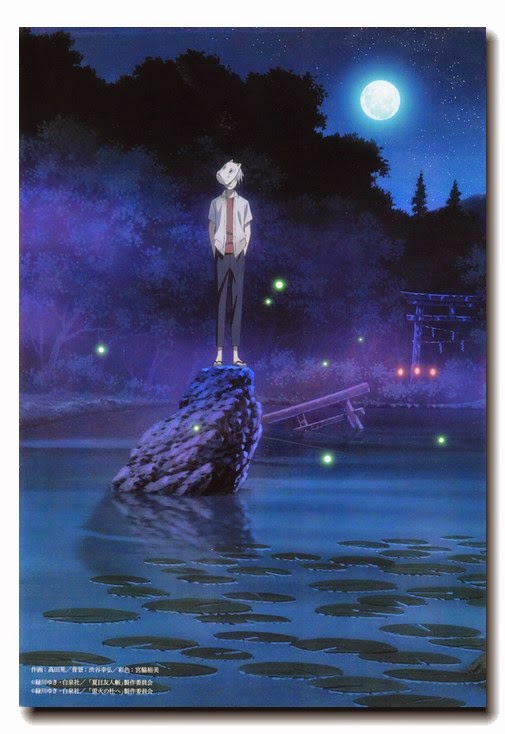 I watched Hotarubi no Mori e last week. Such a simple and beautiful little story. It kind of ties in with what I've been thinking and feeling lately about mortality and meaning. Of course I suppose one reason we love stories at all is that in their selection of glimpses and moments they achieve an effect, one might call it an antidote, that fights the general sense of pointlessness that grows to pervade our living, the longer we live. (Life is so long, and so fleeting.)

We have probably forgotten any number of firefly forests that we once knew, lost in the accumulation and discarding of detail. After we die, I imagine a great remembering, perhaps a great ordering of experience: all the little narrative arcs and how they all contribute to a grander one. Or perhaps there's oblivion. I can't know for sure right now. But it's nice to imagine a secret but innocent friendship, an almost-kiss, and a series of summers that changed a life. "...Even still, until then, let's stay together."

It's a Good Life, if You Don't Weaken

Last night, I dreamed that I was leaving.

In the dream, I was folding clothes in my room, the room that looked out on the grassy side-path to the backyard, and the street outside. It was sunny. (I remember once, in the waking world, hearing someone singing as she walked down that street past our house, something from "Cabaret." I clapped from the invisibility of my room and she said thank you, thank you.)

This was my room in UP Campus, where I lived for almost a decade, from 1987 to around 1995. I still dream about it often. I think that might be the place my brain considers home.

This has been a year for departures, mostly sad ones (I suppose unalloyed happy ones are rare). It's been a year of deaths, of friends and acquaintances and famous people. And, of course, my mother.

I often think this might be my year to go, as well. I've been having a number of health problems of late, problems that have slowly built up in the past four years or so (though they are no doubt the result of the past few decades of bad habits). These days, just getting through a day is difficult.

They say we know ahead of time when we're going to die. The week before my mother passed away, a dead friend visited me in a dream. I wrote about it, in a short short story I called "Astrid in the Afterlife." At the time, I secretly believed it was some sort of premonition. I thought I might go in my sleep at some point (I often have difficulty breathing while lying down). It turned out to be a premonition about my mom, I suppose.

I wonder about this new dream. Perhaps it means as little, or as much, as any dream. Perhaps I really am leaving. Packing my things. Saying goodbye to home. It won't be by my hand, as much as I've thought about that. If it happens in my sleep, I'd be very grateful. I'd hate for it to happen in a hospital, or, as Mick said, in an accident or a fire.

It was a good, if a little bittersweet, dream. It's been a good life, so far.
Posted by Luis K. at 8:21 AM 2 comments:
Newer Posts Older Posts Home
Subscribe to: Posts (Atom)